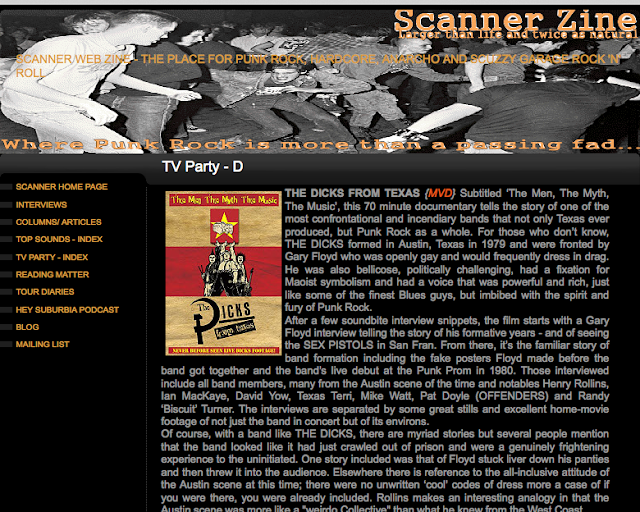 THE DICKS FROM TEXAS {MVD} Subtitled ‘The Men, The Myth, The Music’, this 70 minute documentary tells the story of one of the most confrontational and incendiary bands that not only Texas ever produced, but Punk Rock as a whole. For those who don’t know, THE DICKS formed in Austin, Texas in 1979 and were fronted by Gary Floyd who was openly gay and would frequently dress in drag. He was also bellicose, politically challenging, had a fixation for Maoist symbolism and had a voice that was powerful and rich, just like some of the finest Blues guys, but imbibed with the spirit and fury of Punk Rock.

After a few soundbite interview snippets, the film starts with a Gary Floyd interview telling the story of his formative years - and of seeing the SEX PISTOLS in San Fran. From there, it’s the familiar story of band formation including the fake posters Floyd made before the band got together and the band’s live debut at the Punk Prom in 1980. Those interviewed include all band members, many from the Austin scene of the time and notables Henry Rollins, Ian MacKaye, David Yow, Texas Terri, Mike Watt, Pat Doyle (OFFENDERS) and Randy ‘Biscuit’ Turner. The interviews are separated by some great stills and excellent home-movie footage of not just the band in concert but of its environs.

Of course, with a band like THE DICKS, there are myriad stories but several people mention that the band looked like it had just crawled out of prison and were a genuinely frightening experience to the uninitiated. One story included was that of Floyd stuck liver down his panties and then threw it into the audience. Elsewhere there is reference to the all-inclusive attitude of the Austin scene at this time; there were no unwritten ‘cool’ codes of dress more a case of if you were there, you were already included. Rollins makes an interesting analogy in that the Austin scene was more like a "weirdo Collective" than what he knew from the West Coast.

The legendary Raul’s venue is discussed, as is the band’s close ties with the BIG BOYS and its first move to San Francisco that resulted in its inclusion on the Rock Against Reagan tour with MDC.

The film climaxes with the passing of guitarist Glenn Taylor, Floyd moving back to San Fran and the formation of SISTER DOUBLE HAPPINESS (although no mention of THE DICKS Mk II or the ‘These People’ album) before looking at the reunion of the original line-up some 20 years after they split and the band’s induction into the Austin Music Hall Of Fame.

As for bonuses, you get a couple of live gigs. The first is recorded at On Broadway (San Francisco) in 1982 and opens with a FLIPPER-challenging ‘Kill From The Heart’. The second gig is from Akron, Ohio on the Rock Against Reagan tour from 1983 and it’s a brutal, intense gig opening with ‘Dicks Hate The Police’ that sees slammers launching from all angles and the band in totally destructive musical form while ‘Bourgeois Fascist Pig’ sees Floyd go crowd surfing.

Director Cindy Marabito has crafted an informative and highly entertaining film that’s essential viewing for anyone with an interest in this Punk Rock thing. It’s been a genuine labour of love too, having taken 16 years of work. If there is a negative, it’s that some of the interviews are either recorded somewhere with a lot of background noise (usually a bar), lack clear diction or have a DICKS backing track playing under them that’s too loud. The narrative also tends to wander a little rather than sticking to a distinct time line.

Somehow though, the lo-fi attitude kinda works to its benefit and the resulting film is sincere, intimate and grabs the attention.

Now - I wonder if there is any chance of a sequel, called THE DICKS FROM SAN FRANCISCO? (09.03.16)
Hit HERE for material review prior to 2015 including:
DAMNED, DINOSAUR JR, D.O.A
Posted by Pit Bulls and Other Animals at 1:55 PM