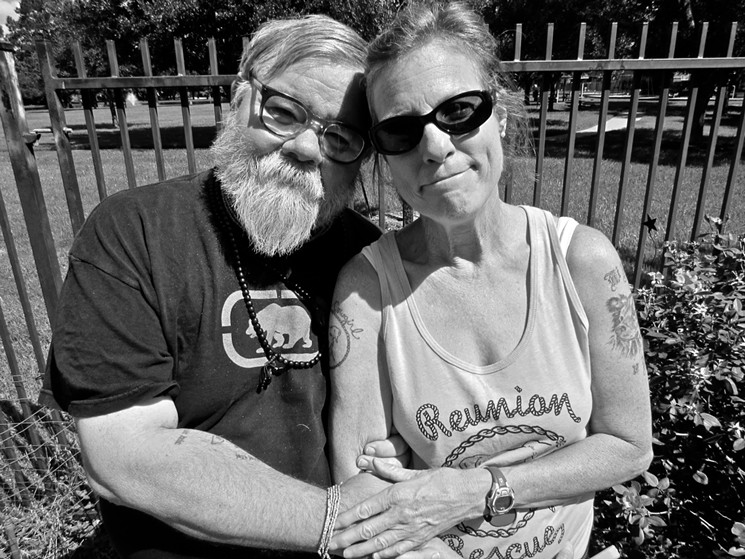 L-R: Dicks front man and 'The Dicks From Texas' filmmaker Cindy Marabito
Photo by David Ensminger
Deep in the heart of rose-scented Texas, amid the leafy collegiate blocks and despite the barrooms spinning cosmic cowboys, Austin developed a sense of punk that at times seemed every bit as warped, electrifying and venomous as the Sex Pistols. Some of the names were unassuming — Standing Waves, the Huns, Terminal Mind, the Skunks — and then arrived the Dicks, a band to make the skin of “normals” crawl. First no more than a make-believe band gestated in the free-spirited, cantankerous mind of gay, left-wing wanderer Gary Floyd, they soon become a typhoon of primal potency. He steered them like a captain ready to slay Moby Dick, but instead of being a behemoth whale, Moby was a metaphor for staid, common-as-mud, ears-closed middle America.

The Dicks wanted to destroy the typical comforts of life: the false, slanted histories; the buried embarrassing sexualities; the rock-star clichés and the workday routines. In their songs, porn shops and Maoism co-existed, drunkenness and pain too. They slugged away at racist police and the Klan, Nazis and rich daddies, and they mutated Jimi Hendrix’s “Purple Haze” into a violent, crude tirade. Floyd dressed in drag, tossed squirty condoms at crowds and used his big-boy body as a symbol of defiance against the norms of social etiquette. In doing so, The Dicks were a breathless hacksaw of renegade music eviscerating the masses.

Cindy Marabito’s new documentary The Dicks From Texas, about the Lone Star version of the band (Floyd later relocated to San Francisco and jump-started a fresh lineup) tries to shed light on the people, places and era that made it all happen. Her decades-old friendship with Floyd, like any authentic insider, allows her to muster up this DIY affair of the heart with down-home urgency and freshness. David Ensminger touched base with her before Thursday night's screening at Walters Downtown.

Houston Press: Since both versions of the Dicks were much admired, how did the film organize around the concept of the Dicks in Texas? Was it due to Cindy's personal connection, or is there some significant or special quality about the Texas lineup/era you both wanted to explore?

Cindy Marabito: The Dicks changed my life and basically influenced most of my interests since the first time I met Gary and subsequently Pat [Deason], Buxf [Parrot] and Glen [Taylor]. With me, their politics, the lifestyle and the music most especially provided a strength, which has fueled me throughout my life. I’ve found the music of the Dicks, the original songs, to help me throughout life’s challenges. I have encountered many others like myself who shared that experience with the Dicks music.

Not to disparage the second Dicks or any of Gary Floyd’s other bands and musical efforts, because his life and his art have been joyful and enriching to experience, but there was a blossoming that happened for me with that first Texas Dicks during a very special time that I felt driven and compelled to document and share. In fact, it’s been my life’s mission to try and capture that story and that wonderful scene in Austin, Texas during the early '80s. 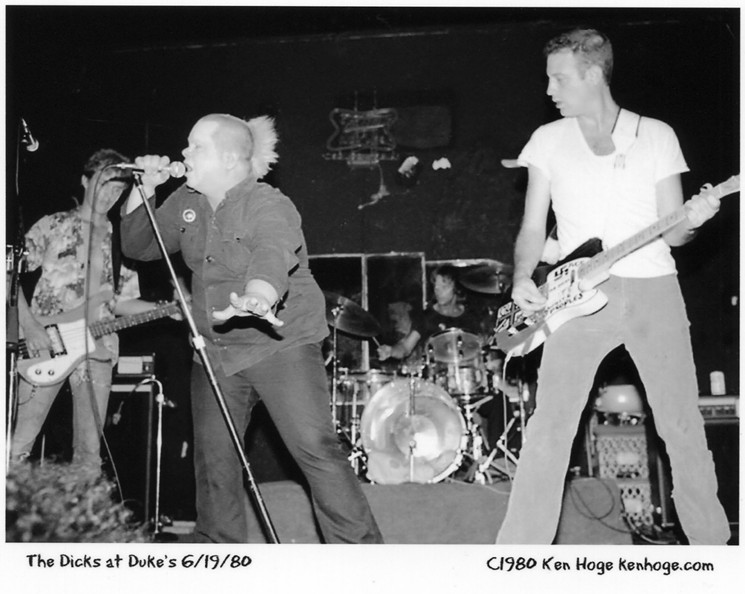 Various books, documentaries and fanzine articles have discussed the band, and Gary, too, so what does the film reveal, uncover or illuminate that really makes it a must-see?

One thing I wanted to try and re-create was the feeling of community surrounding the Dicks and the Austin punk scene. There was something really special going on at that time when you’d walk down the street and come upon lively, interesting people, musicians [and] artists. You might run into a big star like Patti Smith, who hung out for a while in Austin as did other luminaries, but there was something else going on. Everybody was somebody special; that was the feeling one had. I really wanted to create that feeling in the film, not only as an offering from me to the Dicks [but] to the Austin of that time. Also, I wanted to leave something for others to enjoy like a sort of time capsule filled with very special people.

Unfortunately, due to deaths, both members of the band and members of the community, some voices cannot be caught on film. How did that make the film a challenge: How do you honor the dead?

That was hard. It took 16 years to finally finish it, and we lost some close family. To the best of my ability, I tried to create a montage honoring those we lost. It works pretty well, and I can say I’m happy with the result. I didn’t want a huge boulder of despair to hang like a pall over the story, so magically, as always, Gary saved the show. There is an incredible live performance after with Gary being lifted by fans in mosh pit and very lovingly carried over their heads.

To me, that wonderful music and that spirit literally lifts me up, too, as the viewer. Yet again, the Dicks and their music give me a strength that helps me to carry on. It was a spiritual move for me and when I watch the parts of the film with those who’re gone. It’s almost like I get to have them close once more, just for a minute.

What is always striking to me about the band's history is how many "famous band" people really were in awe of Gary — his voice, persona, politics, his sheer presence. As the film makes clear, this was quite true. What was it like to round up and reach out to these people?

The famous people in the film were all very approachable. Henry Rollins made time for me, as did Ian MacKaye, David Yow, Texas Terri and Mike Watt and Lynn Perko. I hate to even leave out the names of the Austin superstars because they really all turned out [and] dropped everything to be a part of the film — Biscuit, Pat Doyle, Buxf, Pat and Gary, of course. Davy Jones and Mark Kenyon really stepped up to the plate to help tie together the old Dicks to the reunion shows. One thing I would like to say: I don’t know how superstars in Hollywood act, but in punk rock, everybody I’ve ever encountered has always been very real and human.

There is a whole new realm of talent creating great music right now. A lot of artists, new and not so new, influenced by the Dicks' music have generously and brilliantly contributed songs for the accompanying CD to the film, The Dicks From Texas and Friends. It’s all over the place as far as tone and style and, to me, really says how these musicians have interpreted those classic Dicks songs. Again, the music itself is so big.

What did the Dicks offer that you feel transcended Austin in the early 1980s? For me, Gary's unabashed queerness and politics completely foreshadowed the current era, for both queer issues and left politics are openly debated, including gay marriage and Bernie Sanders.

That was a time when a large gay communist man in a bra and panties was uncommon. Gary put himself out there with the Dicks in a manner which defied convention. I mean, okay, there was and is homophobia, but Gary really made it hard to bash someone so in your face, someone that everybody loved. I think the Dicks have left that legacy for others both in their music and their politics to not be afraid, a common theme in punk music, but the Dicks took it to a whole new extreme. It didn’t hurt that the music was so damn good.

The Dicks from Texas will screen tomorrow night at Walters Downtown (1120 Naylor) along with performances by Poor Dumb Bastards, Screech of Death, Black Irish Texas and Scorpio Rising. Doors open at 7 p.m.
Posted by Pit Bulls and Other Animals at 10:08 AM No comments: