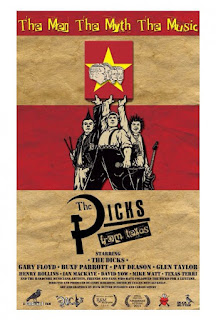 Others: We Jam Econo, The Decline of Western Civilization Parts I and III, Another State of Mind

On a certain level, it would be easy to say that punk rock as a concept in 2016 is irredeemably stupid and retrograde (and let’s face it, you probably could have said the same in 1977), but to be fair, the important service it provides as a hate vaccination for stammering misfit youth has yet to be properly supplanted (maybe someone could get Martin Shkreli working on that?). Besides, one must concede that punk — in its pure, non-poseur state, anyway — has also been an extremely important signifier for freakoids searching for their place in the world, a fact which goes a long way towards explaining why it holds a special place in the hearts and minds of so many otherwise-reasonable adults.

In Cindy Marabito’s new documentary The Dicks From Texas, we get to see that special power in full and brilliant display: it is a film which, though ostensibly about a band, is primarily a document of the myriad oddballs which were drawn into that band’s drunken, radical orbit during Reagan’s Morning in America.


The Dicks were, and remain, Austin’s greatest punk band (unless you’re a skater, in which case it
might be their peers the Big Boys, or if you’re one of those moldy figs who use “punk” as a synonym for “1960s garage,” in which case it’s the 13th Floor Elevators… but y’all knew that). In a time when it was still weird and dangerous to even be a new wave band in Texas, this self-identifying “commie fag” hardcore band, fronted by “fat queer” Gary Floyd (who frequently took the stage in loud vintage dresses and bits of Maoist regalia), were basically asking to get the shit kicked out of them.

Lucky for them, then, that they were also the scariest bunch of motherfuckers in town, a sloppy, ugly band who made little conceit to either cautious tastes or conservative mores. That fearlessness, along with Floyd’s Divine-meets-Chris-Farley-meets-bear stage presence and the band’s trainwreck energy, endeared them to the nascent Austin freak scene while also making an indelible impression upon touring heavy-hitters like Black Flag, Minutemen, and Minor Threat (it wouldn’t be an 80s punk doc without a couple words from Rollins, Watt and MacKaye… where are Thurston and Jello, I wonder?).

MacKaye recalls the band as genuinely intimidating, having been told before coming to Texas that The Dicks “were run out of Austin because they were wanted on charges of terrorism.” Whether that anecdote is partial truth or gleeful mythmaking, its believability is telling.

A slick and artful documentary would hardly be the appropriate document for such notorious gnarlers, and The Dicks From Texas is not that. No-fi and personal, the film stumbles hazily down memory lane, interviewing its subjects in shitty bars and sprawled out on beds, laughing about old pals and relating disjointed anecdotes for which most viewers will have little context. This makes it a far cry, in both construction and cohesion, from the likes of The Filth and the Fury or even We Jam Econo, but frankly, I couldn’t imagine the story told any other way. How could a Texas punk doc NOT be this folksy and weird?

The Dicks From Texas probably isn’t an ideal entry point for the casually curious, and I would be hard put to call it a great film. It is, however, honest and passionate as fuck; any dirty dog who’s ever blasted “Dicks Hate the Police” on a shitty stereo in a shitty apartment will get everything they need out of it, plus a desire to hug the cuddly Gary Floyd of today as a bonus treat. If you want anything more than that, you’re probably a poseur anyway.

Screens as part of Sound Unseen in the Twin Cities on February 10th, 2016.
Posted by Pit Bulls and Other Animals at 8:47 AM