The Dicks From Texas .. a new documentary on old Dicks written by Kevin Curtin 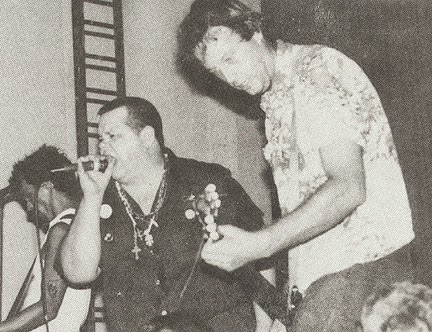 The Dicks From Texas

"Nobody could put their finger on why everyone liked the Dicks," assesses filmmaker Cindy Marabito. "Here's this fat, cross-dressing, flamboyant-but-macho lead man, these criminal-looking bass and guitar players who looked like they'd slit your face open, and a fuckin' kickass drummer. But it just worked.

"That music struck a chord."

"A snot-stain on a wall would've done justice to the Dicks!" exclaims Dicks singer Gary Floyd, "but Cindy went out of her way to tell a very honest story of the band."

"To get all these people to get together and record Dicks songs 300 years later?" Floyd wonders aloud. "I'm as touched as you can be."

"Who wants to see a bunch of old dicks?" he cracks.

Read Kevin Curtain's full piece here: http://www.austinchronicle.com/music/2015-03-06/playback-inside-antones/
Posted by Pit Bulls and Other Animals at 6:28 AM